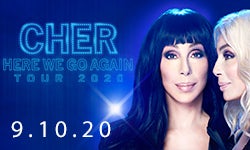 LOS ANGELES, Mar. 12, 2020 – With deep regret, CHER has announced the postponement of all concerts on the "Here We Go Again Tour" effective immediately.

This includes the Oklahoma City concert planned for tonight, March 12.

“Ï'm heartbroken, but the health of my fans and my touring family comes first. The shows have been really special but, nothing is more important than everybody's safety. I’m excited to see everyone when we’re back out on the road.” said CHER.

Currently held tickets will be honored for the new date, and no action is needed if fans want to keep their tickets and current seat locations.

Due to overwhelming demand, Cher has extended her phenomenally successful Here We Go Again Tour, announcing additional dates in 2020. A complete list of upcoming shows follows this release and includes previously announced 2019 dates. On the North American run alone Cher has already sold an astounding 540,000 tickets.

Nile Rodgers & CHIC will continue as the special guest for the North American outing. Produced by Live Nation, the newly announced dates kick off March 6 in El Paso and will visit cities including  Memphis, Miami, Kansas City before wrapping in Sacramento.

Cher will also be performing on the season finale of Dancing With The Stars on November 25th.