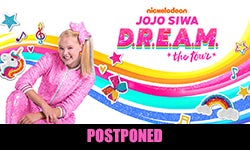 In light of ongoing public health concerns, the JoJo Siwa show has been postponed.
Ticket holders should hold on to their tickets, which will be honored at the rescheduled date to be announced soon.

JoJo was bound to be a star from the very beginning. As a child, she loved to dance, sing and wear her signature BOW’s! Her mom, Jessalynn Siwa, and JoJo moved to California as JoJo grew in popularity. She joined the Nickelodeon family and most recent adventure will be going on tour, D.R.E.A.M. the Tour begins in May of 2019. Her signature bows are known globally and represent her fans called the “Siwanatorz”. She has released five songs and loves being in the recording studio.